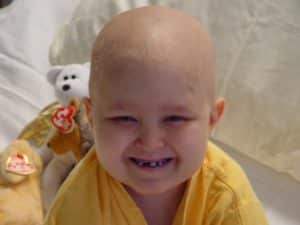 The impetus and passion behind Caddy For A Cure is a disease called Fanconi anemia. Accordingly, the Fanconi Anemia Research Fund receives a portion of funds received by the Caddy For A Cure program.

When Christian Collins was born on August 25th, 1993, it awakened us to a world that we did not know existed with this lethal and devastating disease. One could say that Caddy For A Cure was conceived of sorts the day we met Fanconi. It has since become our life’s mission to make a difference in this rare disease that so heavily impacts the families of those who are afflicted by it.

Fanconi anemia (FA) is one of the inherited anemia’s that leads to bone marrow failure (aplastic anemia). It is a recessive disorder: if both parents carry a defect (mutation) in the same FA gene, each of their children has a 25% chance of inheriting the defective gene from both parents. When this happens, the child will have FA.

FA occurs equally in males and females. It is found in all ethnic groups, but is a predominant disease in the Ashkenazi Jewish population. Though considered primarily a blood disease, it can affect all systems of the body. Many patients eventually develop acute myelogenous leukemia (AML) and at a very early age. FA patients are extremely likely to develop head and neck, gynecological, and/or gastrointestinal squamous cell carcinomas, again at a much earlier age than in squamous cell carcinoma patients in the general population. Patients who have had a successful bone marrow transplant and, thus, are cured of the blood problem associated with FA still must have regular examinations to watch for signs of cancer.

Because of research sponsored by the Fanconi Anemia Research Fund, scientists in recent years have discovered thatFanconi anemia genes play a key role in the DNA repair pathway and in genomic stability. For example, thirteen Fanconi anemia genes have now been identified, including one (FANCD1) that is identical to one of the breast cancer susceptibility genes, BRCA2. Further research has ascertained that the FA genes play a key role in genomic stability and DNA repair, thus making research into FA applicable not only to the few FA patients in the country but to millions who acquire such cancers as breast, ovarian, prostate, and pancreatic. Thus, funds raised for FA potentially benefit millions. Lee Hartwell, PhD, President and Director, Fred Hutchinson Cancer Research Center, Seattle, WA, [Winner, Nobel Prize, 2001] noted: “The tireless efforts of the Fanconi Anemia Research Fund have demonstrated that a rare genetic disorder can provide a vital key to understanding the basic biological process of cancer itself. The importance of these efforts to the advancement of medical science cannot be overstated.”

We at Caddy For A Cure are deeply humbled to be torch bearers in the world of golf for Fanconi anemia. While rare indeed, we recognize that it is devastating for the families who live with it. We ask for your help and support in our efforts to eliminate this disease.