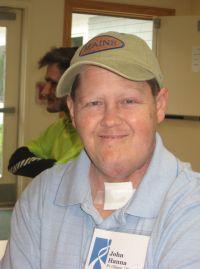 John Hanna
John Hanna is one very special guy. Born with Fanconi anemia and all of the “traits” of the disease, he has done well in his 38 years on earth to live a relatively normal life. He is married to the lovely Racquel, and they have two children, Katelin and Kelly.
(PLEASE NOTE: JOHN LOST HIS BATTLE WITH FANCONI ANEMIA IN APRIL OF 2011. THIS STORY WAS WRITTEN DURING HIS TRIALS)

All was going well until 2007 when John was diagnosed with cancer in the tongue.

Luckily, the cancer was “in situ” which means still contained in the cells it originated in and had not spread; no invasion. Later that year, John went back and had the cancer completely removed with the pathology report indicating clear margins.

Earlier this year, John was diagnosed again with cancer and has been undergoing treatment in NYC. Due to the FA being a bone marrow disorder, chemo cannot be given and John underwent radiation therapy. We are thrilled to announce that John is being released from the hospital and is going home soon to be with his family to get back to a relatively normal life!

Caddy For A Cure had the opportunity to meet John this summer at Camp Sunshine, and what a treat it was. John is one of the neatest people we have ever met and has taken life on with a greater passion than the biggest NFL lineman ever. His ever present infectious smile is a treasure to observe and a lesson for us all.